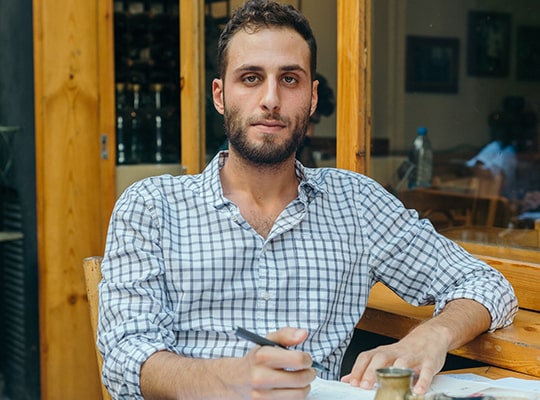 Ibrahim Nehme is a creator, curator, and speaker based in Beirut. His work is a cross-pollination between journalism, activism, and artistic expression, and could be understood as a series of attempts to shift the collective consciousness.

In 2012 he founded The Outpost magazine with the intention of articulating and disseminating a new narrative on and from the Arab region. It became a platform through which young Arabs could channel a new voice of resistance and change. The Guardian wrote that "The Outpost is a reminder of the power of the imagination to shift perspectives"; Buzzfeed selected it as “one of fifteen small printed magazines you need to read”; and Monocle Radio named it as one of the top three magazines of 2015.

More recently, Ibrahim has been researching underground economies, radio networks, club culture, and various forms of mythmaking, as part of a larger study that examines the relationship between cultural output and social impact. The research has thus far led to the creation of Radio Mansion in Beirut and The Outpost café in Amman. He is currently uploading the entire printed archive of The Outpost magazine to a digital platform and sowing the seeds of a new live performance for the theater.

Visuals by Barakunan. Footage from Malek Hosni and Ramzi Hibri. Sound by xlmxkhfi.