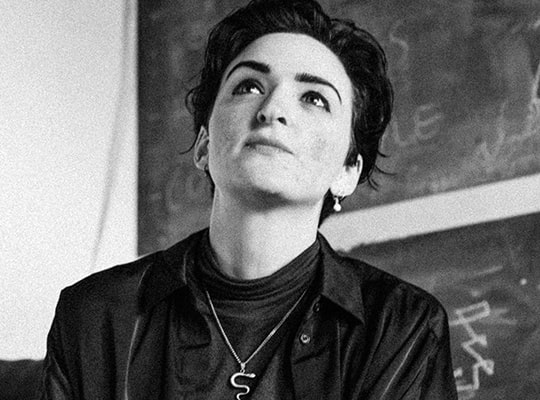 Lisa Luxx is a writer, performer, essayist and activist. She writes for freedoms, for healing, to mobilise and to inquire.

Winner of the Outspoken Prize of Performance Poetry 2018, Luxx was also shortlisted for both Peace Poetry Prize 2016 and Sabotuer Awards Best Spoken Word Performer 2017. She has been nominated for the Arts Foundation Fellowship in Poetry. Luxx's poetry and essays are published internationally in newspapers, magazines and anthologies including by Hatchette, Saqi, i-D, Dazed, Tate Britain, The International Times, Sukoon (Lebanon), The Numinous (US), Verve Poetry Press and Wasafiri.

She regularly headlines literary events in the UK and Middle East, including shows at Royal Albert Hall, Latitude Festival and Station Beirut. As well as collaborative readings for Burberry, Selfridges and her local Women's Centre, her poetry has been broadcast across channels including BBC Radios, VICE TV and ITV. She was named one of the top 4 queer poets by Diva magazine.

Founder of The Sisterhood Salon, a feminist literary gathering in Beirut. She authored an essay on the Economy of Sisterhood for Saqi Books anthology Smashing It, and continues to develop theories around sisterhood as an act of resistance. Her work is also concerned with displacement, adoption, mixed heritage identities and the lesbian experience.

Lisa reads Feminist Currency, a fierce poem in appreciation of women and their endless roles.